Encinitas – Alvin (Alvy) Funaki passed away suddenly in Scripps Memorial Hospital, La Jolla, Friday. He was comforted to the end by his loving partner Vicki Dinsmore, and close family and friends. He was born in Los Angeles and relocated to the Encinitas area where he spent his whole life. Alvy graduated from San Dieguito High School where he was a star football running back in the class of 1955. He attended Santa Barbara Junior College. He was a veteran of the U.S. Army.

Alvy and his family were longtime flower growers in the greater Encinitas area, specializing in carnations and chrysanthemums. Alvy was a regular member of the informal “Flower Growers Grange” that met every morning at the Encinitas Cafe to discuss flower prices, transportation, and the endless other tribulations of wholesale flower production. His favorite pastimes were spending time with his partner, his weekly golf game with friends, and his mornings with the remaining Encinitas flower growers and denizens that passed through the cafe.

Alvy will be remembered as a quiet and reserved man by some, but as a kindhearted, generous, intelligent, and loving man by those he held dear. His many friends and family will miss him deeply and will cherish his memory. Alvy is survived by his partner, Vicki Dinsmore, Toni (Purcell) Funaki and their two sons, Kevin Yuji and Tony Funaki; and grandchildren, Alexis, Jasmin, and David. Services on Sunday, November 30th, at 1 p.m. at the Vista Buddist Temple, 150 Cedar Rd., Vista, CA. At the request of the family, no flowers please.

Born of parents Christian Fredrick Kraus and Gladys (Cudworth) Kraus. Dad Kraus migrated from Germany in 1904 and Mom from England in 1922.

The last of 3 brothers, (Roger born in 1932, Graham in 1936), Norman was born May 14, 1937. He was born in Wilmar, CA, but lived in Covina, CA, in the midst of the orange groves. In 1946 at the age of 9 he moved with his family to Encinitas. As this was post-World War II, Encinitas was sparsely populated. This meant lots of time at the uncrowded beaches, Moonlight Beach being the main hangout.

With his dad being a general contractor Norman was employed from a very young age. Along with his construction skills, his creative talents were manifested and further honed with a number of years at San Diego State College.

Although his first marriage to Lana ________ wasn’t long, a daughter, Keri Means of Citrus Heights, CA, was born.

In a second marriage to Marlyn Busse in 1972, a son Daymon Fredrick Kraus was born of this long-term union.

For much of his life Norman pursued his creative endeavors along with home design and remodeling. His life work was centered around his creativity.

Sculptor: One who shapes, molds, or fashions especially with artistry or precision. Norman was the epitome of a Sculptor.

He was renowned as the sand castle “King of the World” sculpting behemoth replicas of ornate and intricately-structured European castles.

Sand was not the only medium Norman used. He obtained much recognition and won many awards for his works sculpted of wood, metal along with other artistic pursuits.

One might say Norman used his talents of residential design, interior design and furnishings to “sculpt” both home and work environments. He used his exceptional conceptual ability to combine the natural elements along with his clients’ desires and needs, blending them harmoniously and bringing them to reality.

Please send me to post any corrections, comments, pictures or stories and I will post them. Thanks, Daymon

Quoted from the Norman Richard Kraus Facebook page; please visit this page to see many photos of Mr. Kraus’ wonderful sand work and leave a tribute to Mr. Kraus. 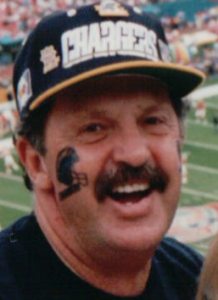 Our beloved husband, father, grandfather, brother, uncle and good friend died from brain cancer (Glioblastoma) in the arms of his wife on June 12, 2018, at Kootenai Health Hospital after a courageous three-month fight. We have all been blessed having him in our lives. He was a perfect example of a gentleman. He was honest, hardworking, patient, kind, caring, giving, strong and loving. He loved to laugh. Many have described him as a ‘sweet man.’

Jerry was born in Chadron, Neb., as the first-born son of Hilda “Tillie” Hofferber Stilley and Benjamin Franklin Stilley, on April 22, 1937. The family moved for a short time to Yakima, Wash., and then to San Diego, Calif., where his father was a Safeway manager. Jerry attended elementary school at Alice Birney Elementary School and when his father was transferred to the Safeway in Encinitas in the north county, the family moved to Del Mar, Calif. Later on he lived in Encinitas where he attended San Dieguito Junior-Senior High School. There his athletic ability blossomed and he became a 3-year, 3-sport letterman — football, basketball, and baseball. He was popular, fun loving and a good student, graduating in 1955. At that time, he and his friend enlisted in the Marine Corps.

Jerry was stationed at several bases in Southeast Asia during his enlistment where he accompanied prisoners from those bases to Japan. He loved the Corps and was a dedicated Marine all his life. After his enlistment he returned to Encinitas and worked in the lumber business and with the National Cash Register Company. A state prison, R.J. Donovan, was constructed south of San Diego, and being experienced in handling prisoners he became a correctional officer with the California Department of Corrections. He continued as a C.O. until his retirement. After retirement he worked for the Padres organization.

Jerry was a devoted San Diego Chargers fan. He purchased season tickets in 1963 and remained a 53-year ticket holder until he released the tickets in 2016 upon the Chargers’ move to Los Angeles. He never gave up hoping that the Chargers or the Padres would win the ultimate championship for San Diego.

It was at a high school reunion that Jerry met his high school sweetheart, Luella Elie, again. Romance bloomed and they were married in 1992 in a garden wedding at Luella’s sister, Patti Hinz’, home in Coeur d’Alene, Idaho. Lue and Jerry moved up to Coeur d’Alene after Lue retired. He ‘adopted’ her three adult children and it wasn’t long before the ‘loves of his life’ began to come along. His world revolved around his grandchildren—Taekwondo, music concerts, award ceremonies, basketball, baseball and soccer games. It didn’t matter what it was, he was there sitting proudly. He told the Grands that it didn’t matter what they chose for their lives, he would be proud of them and that he loved them. For us, he said to appreciate all that we have and to love deeply.

In lieu of flowers, please donate to the Marine Corps Toys for Tots https://www.toysfortots.org.

“Ohana means family, family means nobody gets left behind, or forgotten” (Lilo & Stitch)

If your path ever crossed Bobby’s either here on Maui, or the mainland, you know Ohana extends beyond blood to include you as well!

He first learned to “love-well” while living in Cardiff-by-the Sea, California with his mother Jovita and his father Jose and his 7 siblings, Lena, Sal, Joe, Angel, Anita, Elena, and Frank. Toni, his bride of 56 years, taught him to extend the tent pegs of Ohana to include everyone: co-workers, neighbors, people you see regularly, the postman, the grocery clerk, the gas station attendant. No one was overlooked or unimportant. Bobby and Toni lived Aloha and Ohana.

Bobby’s pride and joy were his 3 children and their spouses, Gianna and Scott, Mo and Di, and Nena and Neal Wakayama. His 7 grandchildren, Billie, Megan, Zach, Taylor, Kiernan, Jake, and Coby filled his cup of joy to overflowing.

The family would like to pass their heartfelt gratitude for the wonderful love and support from the staff of Islands Hospice, Lorelei his caregiver, Kokua Medical, and Printers Inc. & Wailuku Rapid Print.