On January 6 the current varsity Baseball team players and several alumni players came together for what should be an annual event: the Alumni Baseball Game. According to SDAF Parent Baseball Liaison Victor Pisacane, the alumni game was a huge success. “We had 19 past players show up to play and coach. It was a great time for all to reconnect and network with current players and coaches.”

Intrepid Alumni Committee Representative Jay Helmantoler (’60) also happens to be 1960’s Baseball Team Captain, so he was the perfect candidate to represent the Alumni Association! His report follows below, along with more photos of the team!

I had a good time at the Alum baseball game last Saturday. Of course I was by far the oldest guy there and didn’t play… Oldest player graduated 10 years ago, that sure makes ya realize your age I guess.

Incidentally, the Alums beat the Varsity….9-0. Must have been my superior coaching of third base that turned the tide in favor of the good guys.

We had 19 Alum players. I was the honorary captain and those guys respected me a lot and asked me a few questions. The Alum players seemed to know each other and had a good time. The players asked me if i’d like to coach 3rd base which I did.

I told the guys to sign the paper I’d brought, that everyone would bat and they could decide and filter into the game for defensive positions. It went as smooth as silk.

I enjoyed meeting everyone, it could be an annual event… hope so.

The game lasted about 2 hours, perhaps a bit longer. There were a few spectators which was nice. Fog started rolling in about 1PM….but didn’t affect the game at all.

I met the SD coaches, all were very friendly. The head coach, Carlos, told the Alums to be careful and not get injured, pitchers were to only throw fastballs and changeups. It was really nice.

It had been about 50 some years since I was on that field, wish it had been like that when I played. It’s in the process of being restored, mostly the grass after fall and winter which takes a toll on grass.

Oh yeah, I set up an autograph table, not ONE person was interested. Ha. 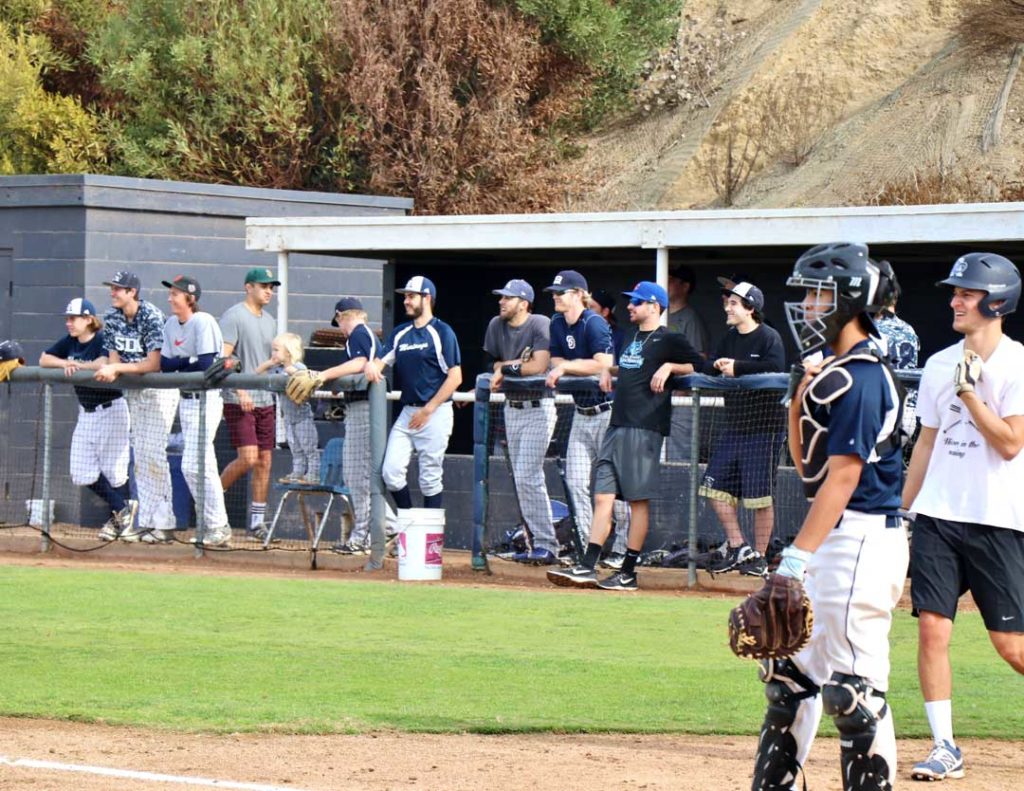 We advertised this game in our monthly eBlast. If you missed hearing about this game, goodness, you need to sign up now so you’ll be ready for next year’s alumni game! Use the form below to get news of alumni events like this game!