It is with sadness that I must report to you the passing of my sister, Clare Rose Dunn.

Clare was a graduate of San Dieguito High School, Class of 1972.

Clare passed due to Glioblastoma multiforme, which is a terminal brain tumor type. She endured her battle for 18 months and passed away in Littleton, Colorado in June 2009. She is survived by her only son Eric, and her husband Lynn Harms.

If anyone knew Clare and would like to correspond, please feel free to write me.

Joanne Midori Kimura Young, 50, of Encinitas died Friday. She was born in Los Angeles and was a special-education teacher at Jerabek Elementary School. She was a member of Gamma Phi Beta Sorority. 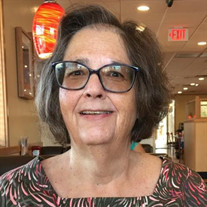 Mrs. Teresa Louise Clark, 64, of Henderson, passed from this life on December 13, 2018, at Christus Trinity Mother Frances in Tyler. She was born March 24, 1954, in Oxnard, California to John L. Nash and the late Dorothy (Hedges) Nash. Teresa and her husband Steve have been married for 45 years. They were previously members of Bethel Missionary Baptist Church in California and are currently members of Longview Drive Baptist Church in Henderson.

In addition to her mother Dorothy, she was preceded in death by her sister, Leslie Kemna.

A Celebration of Life will be held on January 5, 2019, at 11AM at Longview Drive Missionary Baptist Church in Henderson.

The family will receive friends from 10 AM to service time on Saturday January 5, 2019 at the church.

Words of comfort may be shared with the family at www.crawfordacrim.com.

She was born in Oxford and grew up in Meridian, where she led the cheerleading squad at Northwest Junior High School and was voted Miss NJH. She later moved with her mother, step-father and three siblings to San Diego County in California, where she graduated from San Dieguito High School in Encinitas.

After many years living in the Mobile area, she spent the last few years in Pensacola, Fla., Meridian and finally Jackson.

Well known for her generosity, independent spirit and sharp wit, Miss Warner was cherished by family and friends and will be sadly missed. She said she wanted to “love forgotten people,” those with few or no friends.