At no more than two, Nancy would wake at night and ride on her rocking horse until she fell asleep. At six, she began saddle seat, and at 14 won her first jumper class. She was a horse whisper; a woman who could get on any horse and understand how to connect with them. She had many loves: Soda Pop, her pony Vicky, Up-Town Charlie, Ramblin’ Roan. Nancy and Double R had a special, one-of-a-kind dynamic partnership. She inspired many equestrians with her natural, spirited talent as a fierce competitor in hunters and jumpers shows all over California and won most of her medal classes.

Nancy’s teenage years were spent riding and hanging out at Pasa Tiempo, Rancho Santa Fe. A fifth generation Californian, Nancy came from a long line of horse women. Nancy had a love for all animals. For years, she bred, raised, and sold cockatiel birds. Nancy was a passionate, talented surfer. Graduated from San Dieguito High School a year early in 1974, where she participated in the nation’s first surf P.E. program. Since the late 80s, Nancy could be found at Igor’s surf spot almost every day; a true local through and through and enforcer of surf-beach etiquette.

Nancy was preceded in death by her sister, Ann Arbuckle, and her son, Matthew Moody. She is survived by her daughter, Brooke; her husband, Theodore; her mother, Roberta “Bobbie;” many cousins, nephews, nieces and friends in both the surfing and equestrian world. Nancy enjoyed coffee, conversion, Mountain Dew, gardening, Crosby Stills and Nash, Cinnamon Toast Crunch, Sci-Fi movies, halibut, milk, arguing and Camel cigarettes. Throughout life, Nancy kept a special relationship with God. She was a woman taken by the wind; she had a zestful drive in life that is indescribable unless one knew her. Nancy, shine on you crazy diamond.

Today the world had to say goodbye to my best friend and the most amazing mother,grandmother, and great grandmother Cheryl Bonney. She passed away at 10:06pm PST in Eugene,Oregon You will be forever missed and loved!
SOMEWHERE ….. THERE’S A PLACE FOR US… I love you mommy

“It is with a heavy heart that I post this message. Our classmate Tommy Gleason passed away last week. He had been battling cancer for some time. I actually did not know Tommy in high school but became connected to him through my husband after high school. Tommy was such a sweetheart. A gentle soul. He worked at the Home Depot in Encinitas. His wife Kathy called today to let us know that there will be a memorial service for Tommy on February 14th at 1 p.m. United Church of Christ, 2020 Chestnut, Carlsbad. Please pass the word on to any friends of Tommy that you can think of.

…We miss him dearly as he was a very kind and loving brother, son and friend. He was an exceptional drummer, artist and loved the ocean. He had many talents in fact and was always there to help those in need.

In HS he was a surfer and sometimes [didn’t make] it back to school if the surf was not good that day:) Kim, as we called him, never married but he had one true love from SDHS and that was Marla Cruz. He never really got over her and talked of her until the day he died.

He knew so many people in Solana Beach, Del Mar, Encinitas and all over North county. In fact I would often be asked if I was Kim’s sister because we resemble one another and it’s an unmistakable last name.

He is survived by his mom, dad, 2 sisters, and 2 brothers, Our oldest brother died at 50 of a heart attack as well. Kim was known to be kind to everyone and had a heart of gold and a smile of sincerity.

He was a beloved artist, friend and brother as well as an outstanding drummer.

Joseph Edmond Kowalski
Jim Alan Kraus
Eddie Lounibos”San Dieguito Class of ’73 classmate Korrine Kraus reports that Eddie Lounibos (Class of ’74) lost his battle with cancer on Oct. 16th [2014]. Eddie was the younger brother of Cathy and Lenore Lounibos. He was a Solana Beach homegrown. Everyone knew the ‘Lounibos’ family (5 kids).

Elaine Marie Lund
Janis Marie Main (Ball)
DANIEL PATRICK MINSHEWDaniel Patrick Minshew, 53, died on Thursday, July 16, 2009, at home. Born on December 6, 1955, in La Jolla, CA, he grew up in Encinitas and graduated from San Dieguito High School with the class of 1974. For the past 22 years he resided in Valley Center with his wife Debbie. He was an Ironworker for 35 years and co-founded and co-owned Minshew Brothers Steel Construction Inc. in Lakeside with his brothers John and Jim. He enjoyed spending time with family and friends at his vacation home he built in San Felipe, Baja. His passions included driving and showing his classic car collection, listening to music, golfing, and attending and watching Nascar and offroad racing events. He raced a class 1-2/1600 car for Brawley Steel Racing from 1978 thru 1980 including the Baja 1,000 placing 2nd, and a 1st in the Baja 500. He is survived by his wife of 28 years, Deborah Minshew, of Valley Center; brothers, John Minshew (Cheryl) of Lakeside, James Minshew (Cheryl) of Alpine, Victor Minshew, of San Diego; sisters, Frances Ardent (Robert) of Valley Center, Delores Thweatt (Larry) of Escondido, Mitzi (Ed) of Gold Beach, Oregon, Christine Pederson of Pomeroy, Washington, Nancy Doherty (Terry) of Oceanside; sister-in-law Margie Minshew of Valley Center; brother-in law Alvin Allen of Valley Center; Wilburn (Stan) Dunlap of Carlsbad, many nieces, nephews and close and dear friends. Daniel was preceded in death by his parents, Charles and Lois Minshew; brother Charles A. Minshew; sisters, Billie Jean Allen and Sally M. Dunlap. A Memorial Service will be held at 4:00 p.m. on Saturday, July 25, 2009, at Bates Nut Farm in Valley Center.

Services will be held at a later date.

Daniel Robert (Dano) Roy, 52 CARLSBAD — Daniel Robert Roy, 52, passed away of natural causes, Sunday, July 27, 2008. Born Dec. 24, 1955 at Scripps Memorial Hospital in LaJolla. He remained in California all of his life. A 1974 graduate of San Dieguito High School, he went to work for the Carlsbad Water District. After 20 years, he retired. He went to work for Harloff BMW in the Parts Dept., where he remained for six years. He left Harloff to pursue his dreams of a drum school for children, and devoted his time to playing in the band, Sauge. He leaves behind his love of music and all his good friends, his parents, Rob and Anne Roy of Carlsbad; sister, Kim Roy, sisters and brother-in-laws, Robbie and Bill Dittberner of Madison, Nebr., and Vicky and Keith Felix of Salix, Pa. A celebration of life will be held between 3 – 5 p.m., Friday, Aug 8, at The Grand Avenue at 752 Grand Ave., Carlsbad.

He is survived by spouse Ekekela Ridgeway of Pahoa; son Paul Kainalu Switgall of Pahoa; daughter Punahele Ridgeway of Pahoa; brother Paul Stanley Switgall of San Diego; 2 grandchildren. He was a member of Defenders of the Wildlife, National Rifle Association, Surfrider Foundation and Feed the Hungry. Family request casual/beach attire. 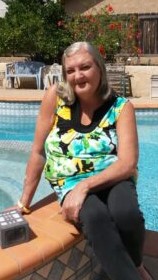 Teri Tucker, age 63, She entered this world on August 24, 1956, in Covina, CA. Beloved daughter, wife, and sister, she was called to her eternal resting place on Friday, August 14, 2020, She past suddenly and unexpectedly.

Teri grew up in Covina, CA until high school when she moved to Cardiff by the Sea, CA in 1971. Teri attended San Dieguito High School, and graduated in 1974. Teri worked for Avon for 22 years and loved being a part of the Avon team. After retiring, she became the Boss of the House where she love to entertain, cook, spend time with Jamie and their many kitties.

Teri loved Oregon and spent every summer on her grandparents farm. She also loved to go for drives, whether it was a day or two weeks to go see small town America. Her favorite was the California coast and driving up to see the giant Redwoods.

Teri is survived by her husband Jamie, brother John, sister in laws Diane and Patty, brother in laws John and Mike, and many nieces and nephews.  Teri is pre-deceased by her mother and father, Wayne and Geri Franklin.

Donations in Teri’s memory may be sent to Rancho Coastal Humane Society in Encinitas.