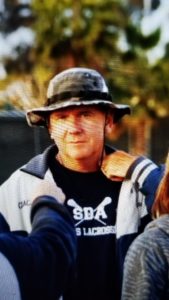 Coach Chuck is an San Dieguito HS alumni class of 80. In HS Chuck has played for SDHS in one of the first HS lacrosse programs (along with Torrey Pines) in Southern Ca.  In 1976 Chuck was one of the first players to learn youth Lacrosse in San Diego while playing for Oak Crest.    After high school graduation Chuck quickly started and coached Oak Crest middle school lacrosse program that still runs today.  In 1988 Chuck Coached the SDHS boys to the late 90’s until the school changed to LCC where he coached boys a few more years.   He left the Boys team to start coaching girls at LCC  98 where they won their first girls Lacrosse Championship in 2001 as well as the state championship. During his time at LCC he started the youth girls program to help feed LCC which still runs today. After coaching the LCC girls Lax, Chuck coached Carlsbad girls then moved to Santa Barbara and coached High School boys for a couple of years. In 2010 Chuck was asked to coach  girls at SDA where he still is today! Coach Chuck was inducted into the San Diego Chapter Lacrosse Association Hall of Fame class 2016.

Coach Mimi is a proud SDA alumni and graduated class of 2014. She played varsity lacrosse all four years with Chuck as her coach! She continued to play in college at University of California, Santa Cruz where she got awarded MVP in 2014 and 2018, as well as First Team All League from the Western Women’s Lacrosse League in 2014 and 2018. Mimi came back to SDA in 2020 as the JV head coach, and she couldn’t be more excited to continue coaching  at SDA!