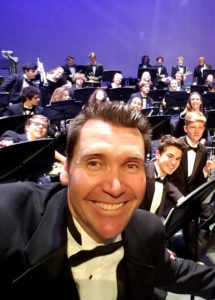 Mr. Wuertz has been teaching music at SDA for 15 years. During that time, SDA’s performance ensembles have received numerous awards and Superior performance ratings. Prior to becoming the Band Director at SDA, he served as the Assistant Band Director at Vista High School for 3 years. He received his BA in Music Composition from UCLA and his Masters in Instrumental Conducting from Sam Houston State University. Mr. Wuertz was named SDA’s Teacher of the Year in 2011. He is a member of the Southern California School Band and Orchestra Association and the California Music Educators Association. He is currently on the board with the San Diego Winds organization. In addition to teaching, Mr. Wuertz plays percussion professionally in San Diego with the Seaside Brass. He resides in Vista with his wife Robin, their children Peyton and Parker, and their 2 puggles Roxy and Diego. He is also a huge baseball fan – Go Padres!

Steve first picked up a trumpet in the fourth grade and was playing professionally in a dance band by his second year of High School. He continues to play professionally to this day.
Trained at the prestigious Berklee College of Music in Boston, he now splits his time between playing and teaching music.
Proficient in many styles of music, he has played with such legendary musicians as Sammy Davis, Jr., Kenny Rogers, Lou Rawls, Patty Page, Bobby Shew, and Poncho Sanchez, as well as many favorite local groups and musicians. As well as The Ultratones, Steve has played with The Big Time Operator and The Soul Persuaders, as well as various local Salsa and Jazz Bands.
Currently, Steve is the leader of The Jazz 88 All-Stars; a group organized to provide an outreach for the non-profit radio station, KSDS.
His film and television credits include: Pearl Harbor and Manhattan, Az.
For the last eight years, he has been the Musical Director for NAMM (North American Musical Manufacture’s Association) which is headquartered in Carlsbad, California.
He is a brass coach for Digueno and Oak Crest Middle in Encinitas as well as the Artistry in Music Program, which includes all 9 Elementary Schools in Encinitas, CA. He also serves as the Band Director for Jefferson Elementary School in Carlsbad.
As a studio musician in Los Angeles working for Bizarre/Planet Records he has recorded with many global and local artists.

Mickey Janelli began teaching students and playing professionally at the age of 16. She has performed with bands throughout this country and in Europe , playing with singers such as Frankie Avalon, Bobby Rydell, James Darren, and Della Reese. Since coming to San Diego in 1990,  Mickey has worked with all grade levels of instrumental music students in the San Dieguito area. She has conducted bands, taught sectionals, wrote arrangements, and shared in the administrative responsibilities of area music programs. Mickey is currently an Artist-In-Residence in the San Dieguito Union High School District since 1999 when instrumental music was brought back into the school system. She assists the band directors at Oak Crest and Diegueno Middle Schools , as well as La Costa Canyon and the San Dieguito Academy High Schools. She has her own music studio and is conductor of the Band In Black and C Breeze Sax Quartet. She is the administrative director of Artistry In Music, an after-school elementary band program for the Encinitas Union School District . She conducts the bands and specializes in woodwind instruments. Mickey is a member of the American Federation of Musicians, the Coastal Communities Concert Band, and the San Diego Concert Jazz Band.

Born in Denver, Colorado Scott began playing the Horn at age nine studying under Wilke Renwick, principal Horn of the Denver Symphony.  After moving to southern California in the early 1970’s, Scott continued his studies with Jim Keays of the University of Redlands followed by George Cable and Wendell Hoss here in San Diego.
At age 15 Scott began playing musical theatre, eventually working his way into the pit orchestras of ECPAC, Gilbert & Sullivan Theatre in Balboa Park, and Lyric Opera San Diego until its demise in 2011.   Scott’s theatrical involvement is now mainly with youth theatre productions, City Ballet, Pacific Lyric Association, and Vista’s Moonlight Stage Productions.
Though never his primary vocation, Scott has performed in a wide variety of musical settings ranging from professional theatre to community bands and orchestras.  In addition to “free-lancing” Scott is a regular fixture with the Coastal Communities Concert Band and Hornswoggle!… San Diego’s all French horn ensemble. 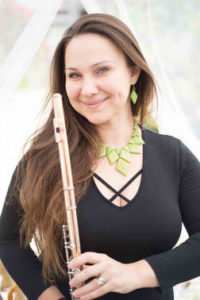 Alina Freiman Steele(M.M.) has been teaching flute since 2001. A member of the MTAC Music Teachers’ Association of California, Mrs. Steele or ‘Ms. Alina’ as most students call her, is also on the Board of Directors for the San Diego Flute Guild. She received a Bachelor of Music from DePaul University School of Music in Chicago, and a Master of Music from New York University. Very fortunate to have studied with some of the most highly regarded flutists of our time, her principal flute teachers have included Linda Chesis, Mary Stolper, and Robert Dick. Ms. Alina continues to be an active performer in chamber and orchestral settings and is a member of the National Flute Association.

Alina Steele is also a sought-after sound engineer. A former audio designer/editor at CBS in New York City, she specializes in post production audio for video. Her work has been heard on Showtime, HBO, CBS, CBS Sports Network, and ESPN. In addition to sound design, mixing, and original music composition, she has recorded audio for many celebrities for radio and television.

Thank you for your interest in supporting our Music Department. Click here to view how you can support SDA Music Programs.